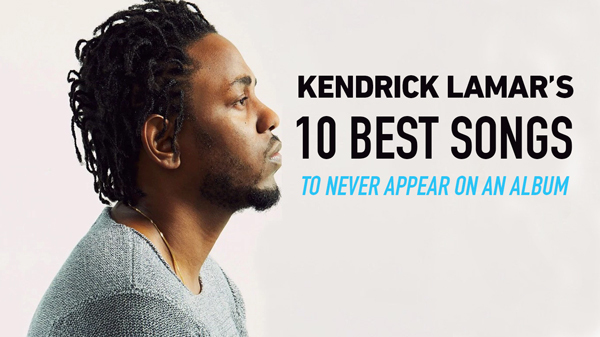 Kendrick Lamar's legacy has been solidified by his cohesive albums and their respective singles, most notably his platinum selling works good kid m.A.A.d. city and To Pimp A Butterfly. His discography actually includes 10 full-length mixtapes and albums with his 2011 Section.80 project earning him his first big recognition as one of hip-hop's most promising artists.

Despite all of this, some of his strongest tracks never made their way onto albums. While the more avid Kendrick Lamar fans might be familiar with his entire discography, we'd like to highlight some of his best work that were released in various ways and may have slipped through the cracks. Continue below to hear 10 impressive songs that didn't find their way onto his projects.

Who wouldn't clear a Kendrick Lamar sample? Especially a sample appearing on "Cartoons & Cereal", which is considered by many fans to be one of Kendrick's best songs, if not his best. It's actually not surprising that it would be difficult to get a Bugs Bunny cartoon sample cleared, and I'm just glad the song was able to even see the light of day. "Cartoons & Cereal" would have appeared on good kid m.A.A.d. city, which is crazy to think this amazing track could've ended up on his nearly-flawless album. Enjoy the fan-made video above.

Kendrick Lamar – Look Out For Detox (Prod. By Childish Gambino) | 2010

With Dr. Dre as Kendrick's mentor, it's safe to say he's one of the few people who actually heard Dre's infamously delayed and eventually scrapped album, Detox. "Look Out For Detox" has Kdot aggressively going in over Childish Gambino's "You Know" beat for a furious, non-stop verse that spans 3 minutes. This was perhaps Kendrick's best display of his rapping talents when it dropped in 2010.

One of the most anticipated hip-hop albums of recent memory is undoubtedly the mythical collaborative album between Kendrick Lamar and J Cole. They've been teasing a joint project for years and the hype level hit an all time high on Black Friday in 2015 when the two artists simultaneously dropped songs rapping over each other's beats. Kdot went in hard over J Cole's "A Tale Of Citiez" instrumental while Cole went in over Kendrick's "Alright" beat. Kendrick's version is especially interesting because it came after his To Pimp A Butterfly album in which he took a more jazzy approach, and this song returns to his classic hip-hop roots.

When "Sex With Society" dropped, many believed it to be the second single off his Section.80 project. However, when it rolled out, the song didn't find itself on the tracklist. Kendrick has always been a fan of metaphors and we hear him repeatedly chant "Life a bitch… but I'mma keep the pussy wet. Yep". He delivers a slower flow emphasizing the pronunciation of each word.

"Control" is technically Big Sean's song, but Kendrick stole the show and changed the game with one verse. It didn't end up on Sean's next album and stands along as a loose single. This was the moment Kendrick staked his claim as the king of rap, declaring himself as Tupac's heir "I'm Makaveli's offspring I'm the King of New York / King of the coast; one had, I juggle them both". Kendrick goes on to call out many of his peers naming J Cole, Big K.R.I.T., Pusha T, Meek Mill, A$AP Rocky, Drake, Big Sean, Jay Electronica, Tyler The Creator, and Mac Miller proclaiming "What is competition? I'm tryna raise the bar high / Who tyna jump and get it? You're better off tryna skydive." The song was so significant to rap and was talked about for months to come. Rolling Stone even published an article titled '9 Ways Kendrick Lamar's "Control" Verse Changed The World'.

Just two days before the release of Kendrick's classic good kid m.A.A.d. city, he released "The Heart Pt. 3", one of his most lyrically vulnerable tracks to date speaking on his insecurities and ambitions. For fans of Kendrick, expectations for his album were sky high as he comments on the pressure with the opening lyric "When the whole world see you as 'Pac reincarnated / That's enough pressure to live your whole life sedated." With the album releasing just around the corner on 10/22/12, Kdot knew he had a classic on his hands and closed the track out sounding like he was crying as he repeated "Will you let hip-hop die on October 22nd?" Kendrick's emotional self-awareness is put on full display here as he felt it's his duty to carry the torch and keep hip-hop alive.

2012 was a big year for Kendrick. He kept the content flowing leading up to his album release and even teamed up with one of his influencers, Young Jeezy, on "Westside Right On Time. Enjoy the playful song above.

Just 8 days after good kid m.A.A.d. city dropped in 2012, Kdot released the loose single "The Jig Is Up" rapping over a J Cole & Canei Finch produced beat. We hear him show off his more aggressive style as he goes in over the classic hip-hop sounding instrumental.

Kendrick Lamar is actually a HUGE Lil Wayne fan. He loves the rapper so much he even dropped a mixtape titled C4 early in his career that had him rapping over Lil Wayne instrumentals. He impressively released this freestyle within 24 hours of Lil Wayne releasing the original track. Here he truly shows off his insane skills as he goes in hard before the beat fully drops, allowing the knocking 808s catch up to him. His labelmate ScHoolboy Q appears on the track as well.

Ah yes, the infamous "Pyrex". That's the unofficial name fans have given to the Dr. Dre-produced Kendrick track that appeared on a Beats By Dre commercial in 2013. Unfortunately there is only snippets of the song heard on the commercial, and it's become a much-anticipated track that may never be released in full. Let's hope the full song comes out someday.