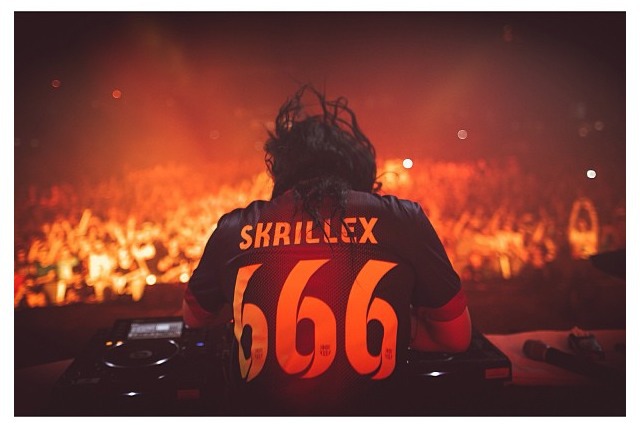 Skrillex made his mark once again this past weekend headlining HARD Events 'Day of the Dead' music festival in downtown Los Angeles, CA. On top of a jaw dropping performance, everyone in attendance was lucky enough to hear a hefty amount of new tracks that we expect to be released sometime next year. Skrillex spoke with Rolling Stone magazine about the performance and his plans for next year. In the interview, RS asked about the six uniquely diverse new tracks he debuted at DOTD and Skrillex replied by saying:

They definitely cover a lot of ground, and there's still more stuff on the record that is yet to be seen. It's still me, but it's like… still the same fabic, but a new coat, a better coat.

Skrillex also revealed that Icelandic singer/songwriter sensation Björk was on the top of his list of people he'd like to collaborate with; stating that:

"Björk's someone I've loved since I've been a vocalist, and we did some touring in South America two years ago. [We] talked about making stuff and she even mentioned it in an interview at some point, so I gotta check that off the bucket list. That'd be dope, to do some cool, vibe-y stuff with her."

Lastly, RS tossed up the important question of what we all can expect from the talented producer in 2014:

I'm gonna go it at hard next year. '14 is gonna be super exciting, I'm gonna be out there and doing some new shit.

Check out our exclusive footage of Skrillex playing one of the new tracks below: