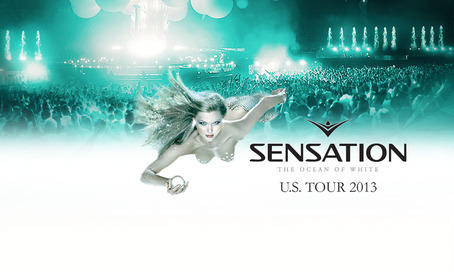 ID&T and Goldenvoice have partnered up to bring you the inaugural Sensation U.S. Tour. This is the infamous 'all white clothing' electronic massive events that have been happening worldwide for years. The tour has already taken place at Oracle Arena in Oakland, California and continues at MGM Grand Garden Arena in Las Vegas, Nevada on October 5th, American Airlines Arena in Miami, Florida October 12th, and Barclays Center in Brooklyn, New York October 26th.

"Sensation will present to U.S. audiences “The Ocean Of White,” which premiered in Amsterdam, toured all over the world and performed in front of 30,000 people at the sold out Rogers Centre in Toronto marking the first Sensation Canada. Acrobats shoot from the ceiling, giant jellyfish hover above the dancefloor, as dj’s guide the crowd through uncharted waters of mesmerizing grooves and melodies".

The lineup to this event will include house sensations Mr. White, Fedde Le Grand, Michael Woods and more!

Guests must be at 21 years of age or older to attend Sensation and white attire is mandatory.

1. Enter through widget here (You must answer the question specifying which city) (Every entry increases your chances)

More info AFTER THE JUMP