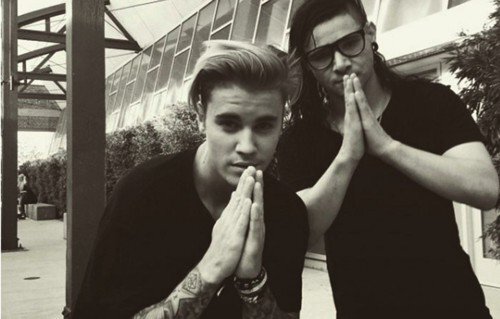 Only 4 days away from the release of his next album Purpose, Justin Bieber has just premiered a cut from the album featuring Halsey entitled "The Feeling" on Zane Lowe's radio show. After calling into Zane Lowe's show and being told by Zane himself that he'd only be playing one song, Justin changed the plan from premiering "Love Yourself" — which Ed Sheeran co-wrote and sings back-up vocals on — to airing the seductive "The Feeling."

Produced by now frequent collaborator Skrillex, "The Feeling" and it's respective production adheres more to the forumla of a radio single than to previous electro-pop tunes like "Sorry" and "Where Are U Now" – with a vibe more similar to their latest "I'll Show You" collab, having us curious as to exactly what direction the Bieb's will be taking on Purpose. Especially seeing how his other brand new song "Love Yourself" featuring Ed Sheeran is an intimate acoustic track far from anything we've heard from Bieber in a very long time.

Official visuals for "The Feeling" should also be coming soon. Justin tweeted a snippet of the video on Nov. 6th along with the words "One week.." You can be sure we'll keep you updated as more info comes out. Enjoy!