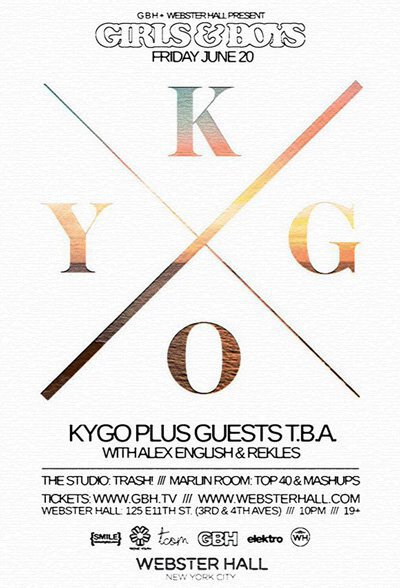 To say Norwegian native Kygo is blowing up would be a gross understatement as the virtually unknown producer 12 months ago has released countless viral remixes racking up millions of plays leading up to finally announcing his first of many live performances in the US; after his first performance in Paris causing a scene and his first headlining show (in Dublin) ever selling out in advanced, it seems the buzz exceeds far past the internet.

After much demand, Kygo has announced his first performance in the US, and what a better location than New York City, one of the world's largest cities. He will be performing at the legendary Webster Hall, literally a registered landmark in the city that has seen home to everyone from early American legends to near every emerging new act from electronic to live music. He will be performing on June 20th with special guests T.B.A. and tickets going on sale this Friday, February 14th at 11am EST, UPDATE:Tickets Are Available Now. Although the show is so far out, with him selling out his first headlining show in advanced, I would highly advise grabbing tickets in advanced as you don't want to be the one missing out.

BONUS: We have the incredible remix that Kygo has done to fantastic cover of MGMT's "Electric Feel" done by Henry Green. Kygo manages to work his signature melody filled magic perfectly sampling the guitar, percussion elements and vocals for a completely new track you can enjoy virtually an any hour of the day. Of course the song is available as a free download, you can stream and grab it below, enjoy!