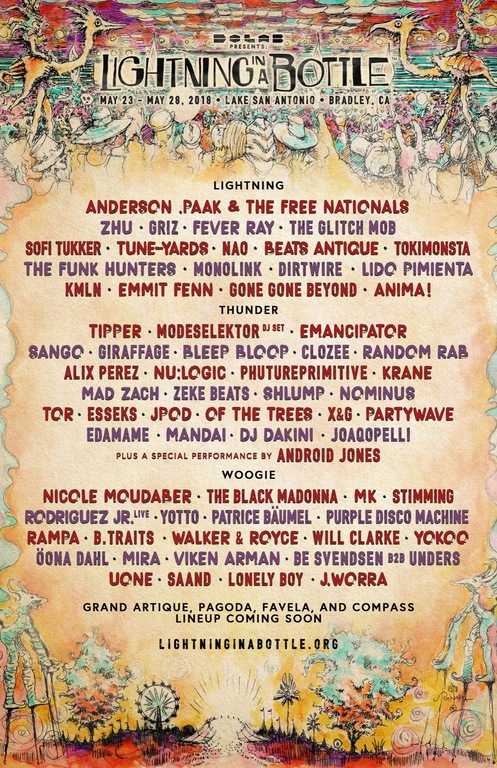 As more music festivals sprout up all around the country, there’s some festivals that prides themselves in setting their lineups apart from most other festivals. One of these festivals is Lightning In A Bottle, presented by the Do LaB. If that name rings a bell, it’s probably because the Do LaB is very well known for their curated stage at Coachella as well as producing other festivals like Dirtybird Campout. If there’s one thing that should be known about the Do LaB, it’s that they have impeccable taste. The festival has also become known for creating amazing stages making for an immersive experience.

This year’s lineup just dropped, and it’s one of the best we’ve seen so far for 2018. As far as their top-billed artists go, they’ve compiled an eclectic list: Anderson .Paak & The Free Nationals, Emancipator, ZHU, GRiZ, Tipper, Nicole Moudaber, MK, and Stimming and more. These names alone are enough to get us hyped, but there's even more treasure in the middle of the lineup card where we see artists like Sango, Giraffage, NAO, The Glitch Mob, Tokimonsta, Clozee, Mad Zach, Krane, Walker & Royce, X&G, Yotto, Emmit Fenn, The Funk Hunters,  and so much more.

Not only has LiB assembled a wide-ranging lineup that has a little something for everyone, but within that range lies some of the best artists each genre has to offer. If you have the time and resources to attend in 2018, it would be silly not to.