Must Watch: Pretty Lights Live Band Light Show Debut at Red Rocks video and new song “Give Your Love Away “

Pretty Lights played his annual 2 night Red Rocks concerts this summer, yet this year changed things significantly by introducing the world to his full live band that accompanied him while playing to alongside a jaw dropping fully custom light and laser show and he just released an official video recap featuring a new song. The group features his past drummer Adam Deitch who is currently also drumming for Break Science and Lettuce. The group also features keyboardist Brian Coogan (New Orleans All-Star), keyboardist Borahm Lee (Break Science), Scott Flynn (John Brown's Body) and on trombone and Eric Bloom (Lettuce). Both Deitch and Coogan played extensively on Pretty Lights recent incredible album A Color Map of the Sun

It was really a truly unique and amazing experience to witness live music and electronic music fused together like never before. The stage was structured to highlight 4 sections for the live musicians and Derick in them middle acting as the conductor for the revolutionary combination elements. In the words of Derek himself:

My dream has come true. I will be hitting the road for my 2013 fall tour with a FULL, AWESOME LIVE BAND! We will be fusing new, hot production with the live band's gritty old school hip-hop soul break styles in a way that production and a live band have never been heard together before. "

This recap is done to the soundtrack of "Give Your Love Away", a brand new Pretty Lights tune, that is great. 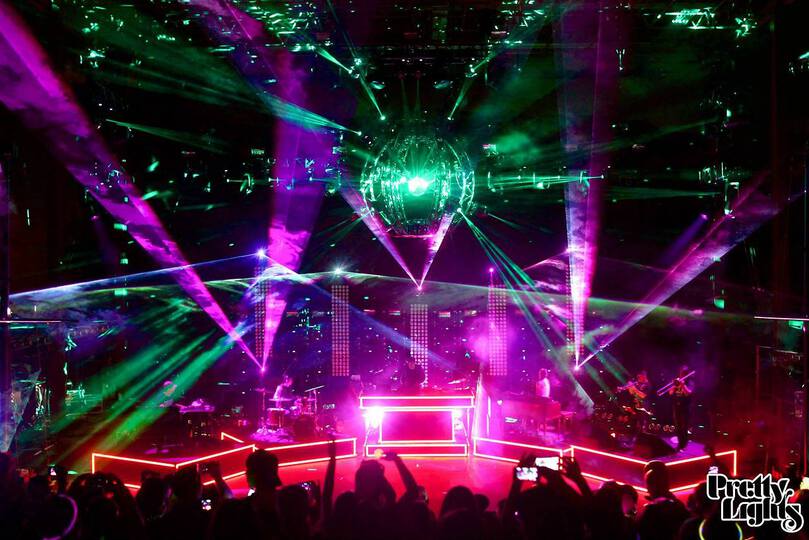