Pretty Lights has executed one of the most legendary marketing stunts to date. A select few of his most loyal fans received a package in the mail with very exclusive cargo. Included in the bundle was a poster that revealed new Pretty Lights Live tour dates as well as a USB drive with dozens of unreleased “flips” from Pretty Lights himself. The posters contained the following, or a similar, message on the back of them:

Greetings, you have been chosen for a new Pretty Lights social experiment.  This package contains unreleased “flips” from Euphoria (April 2017), Okeechobee Music & Arts Festival (March 2017), and Telluride (August 2016).  As one of our most devoted fans, we are choosing you to not only spread this music organically far and wide, but to also share the message that we will be returning to Red Rocks Amphitheater in Morrison, CO on August 11-12 for the 9th consecutive year.  See you soon.

The “flips” are reworks of some of Pretty Lights’ most notable songs and were stored on a custom-engraved wooden USB drive.

This effort from Pretty Lights has thus far confirmed shows at Red Rocks on August 11-12 and Huntington Bank Pavilion at Northerly Island in Chicago on August 18-19.  We expect more dates to be rolled out as more fans unveil their findings.

Pretty Lights is always coming up with innovative ways to keep his devoted following interested… and continues to do so here. Listen to some flips below and enjoy! 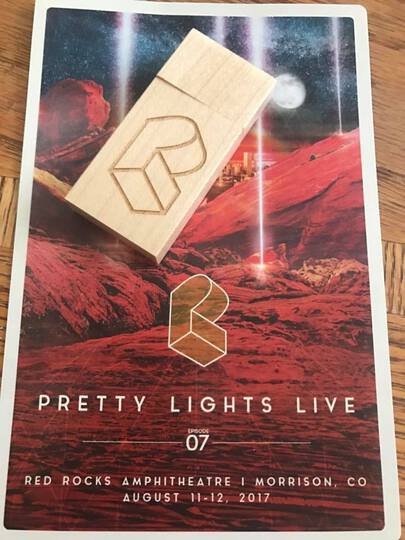