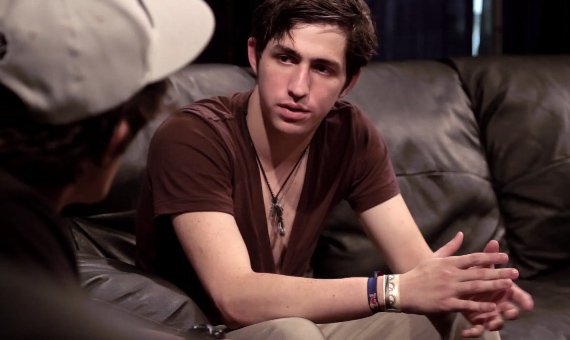 Hey guys, we've been going through some changes, and have a sick interview that we did a few months ago with Porter Robinson. This is a quick inside look at Porter Robinson, showing his thoughts on how people react to music, a breakdown of what he has in store with his live sets, outlook on touring, past thoughts on making "the most exciting drop ever", and his 2 goals in making music. His Spitfire album has been incredibly successful, (listen to the whole thing below), and he's been touring with countless big names like Skrillex, Tiesto, Zedd, and a ton more. This really is the year for Porter.

Porter states how his original goal was to make "the most exciting drop ever". then moves onto his admiration for hyper detailed music from artists like Wolfgang Gartner and Noisia, but liked how "hard and danceable they kept they're music". He ends with his conclusion for his outlook on making music "Fuck everything else except for those two goals, I want to be complex,  and I want it to be agressive."  He certainly does both of those so well, and been doing nothing but making HUGE waves since the interview. It was a great pleasure to sit down with Porter, and it's really amazing to see how big he is getting, and how fast. Hope everyone enjoyed this quick inside look on Porter Robinson.

This video was filmed by our friends Cinesthetics, who do some of the best Photo and Video work I've we've ever seen. Follow them on Facebook Here. This interview was filmed at Global Dance Festival at Red Rocks, check out more information on the festival here.