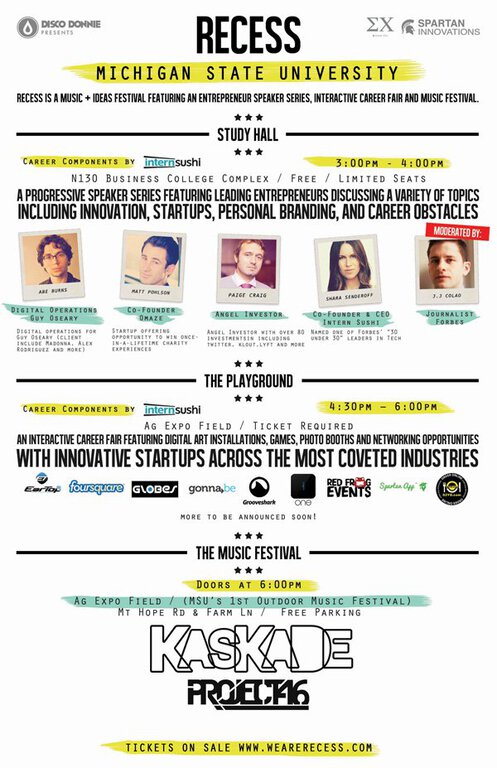 One of the pioneer touring electronic festivals GlowFest who has had acts such as Pretty Lights, Deadmau5, Hardwell, Porter Robinson, Big Gigantic, and countless other top acts have gone under some serious changes and grown as a company. They are now called RECESS and are in their terms a "Music & Ideas Festival".  The second edition of the new event will be taking place at Michigan State University in East Lansing, Michigan on Friday April 19th, 2013. Featuring musical guests Kaskade and Project 46.

During the day RECESS is a speker series featuring an out-of-the-box progressive speaker panel during the day from 3pm – 4pm "Study Hall" (held in Business School Room N130 on Campus). Then there is “The Playground”, which is an interactive career fair at the venue from 4:30 – 6:00pm (AG Expo Field) prior to doors opening featuring 16-20 disruptive startup companies. (Video explaining Recess more below)

To end the day is the word class electronic concert they are known for at Michigan State University, where they have brought out electronic icon Kaskade and rising Canadian duo Project 46. The festival is going to be the first outdoor music festival that the campus has seen, so should get extra crazy.
It's amazing to see electronic music spawn such a potentially impactful event, reminding me of 3LAU's Pencils for Promise campaign.

You can get early bird student tickets and general admission tickets right now for $25 and $30 before they go up.

RECESS has been nice enough to let use giveaway a pair of tickets to this event. All you have to do is follow the 3 steps below.

To Enter do these 3 easy steps