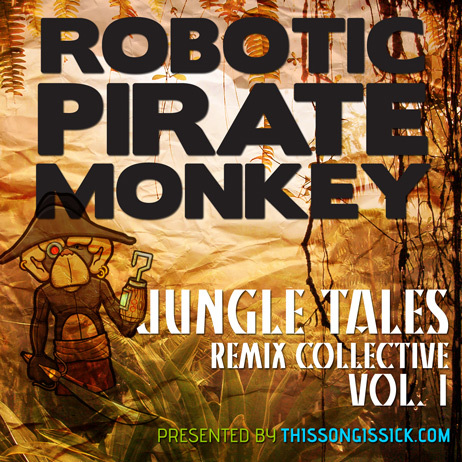 Today I've got one of the sickest releases to throw up, and it's sponsored by Thissongissick. It's the latest from my good friends Boulder DJ's Robotic Pirate Monkey and it's called Jungle Tales A Remix Collective: Vol 1. Their debut release we helped with Disturbing Pleasant Streets is a must hear if you haven't yet, consisting of 6 insane remixes (Like Lupe Fiasco, Dr. Dre, Modest Mouse, Blink 182 and more) and 4 completely original tracks. Well today Jungle Tales follows in the remix part of their first release, packed with 9 BANGER remixes mastered by Nick Lucini. I already posted the Lily Allen – Smile remix and the Bob Marley – Mr. Brown remix and the video for Miley is Trippin. They do so much to these songs, they are hardly remixes and more original songs with samples from the artists like Aerosmith, Sam Adams, Foreigner, and more. The whole album is very sick, and as always I've picked a few of my favorite tracks, but defintely grab this whole mixtape. The song Miley is Trippin is a bass filled remix to infamous Miley Cyrus vs Biggie mashup by RPM's own Hathbanger with some added vocals from the now infamous Mily Cyrus Salvia video. There's also a revamped extra bass filled "Womp version" of the Jordan Corey – Breaking All The Rules (RPM Remix). Turn up the bass for the remix ride and enjoy!