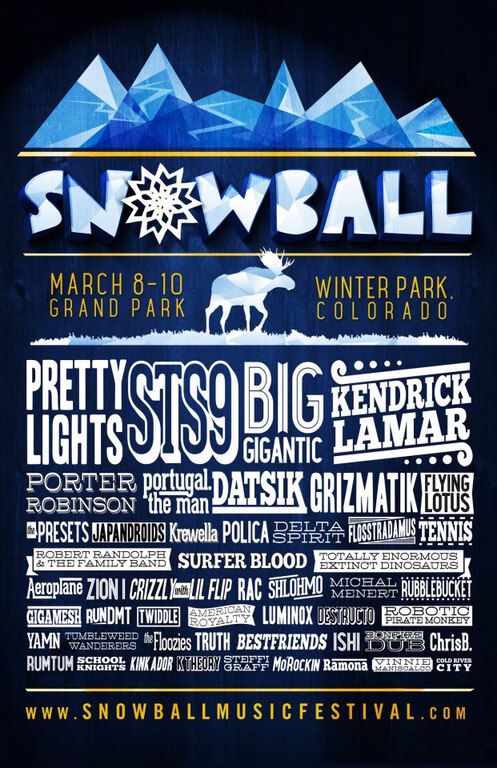 It already been announced that the massive 3 day long Colorado snow music festival SnowBall had relocated from the Vail area to Winter Park for 2013. The festival has always had one of the freshest most diverse lineups not just in Colorado but on the West coast. They have consistently had a great blend of the hottest new electronic, live band, and hip-hop acts all at the same festival to enjoy while freezing your ass off. Well now for the big switch of locations, this lineup completely makes up for the move. The headliners include past attendee Colorado electronic icon Pretty Lights who knows how to shut a festival down. STS9 makes their highly anticipated debut Snow festival appearance which is sure to be one to remember. Rowdytown headliner, fellow Colorado Native Big Gigantic are set to unleash their new stage setup. The man bringing real hip-hop back to American mainstream… Kendrick Lamar. One of our favorite rising Electro stars Porter Robinson is set to have a epic headlining performance. Datsik will probably drop bass louder then you have ever heard.. literally. Flying Lotus is one of the most intelligent producers and will take you too another world with his future sounding productions. The collaboration project between GRiZ and Gramatik aka Grizmatik will be performing their first official festival performance with live production. And those are only the headliners playing the festival, look above / below at the rest of the jaw dropping lineup. These are more then enough reason to rage in the freezing snow for 3 days for an unforgettable weekend filled with snow and music. Hope to see everyone out in the snow this year!

Full SnowBall Lineup After the Jump