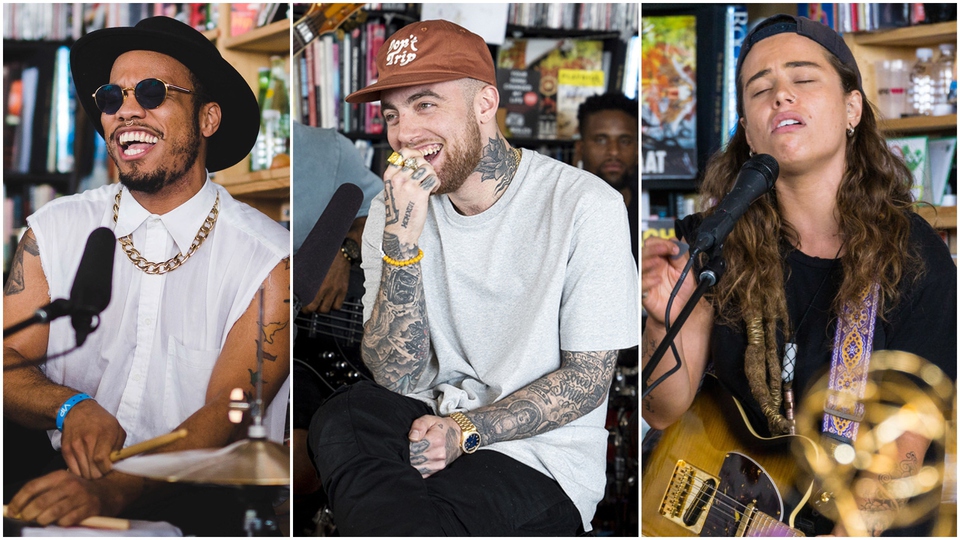 We can’t say enough about NPR’s Tiny Desk Concert series. Tiny Desk Concerts started as a quaint side project in the NPR studio back in 2008. Now, twelve years and about 1,000 performances later, the series has become a music industry mainstay, a common ground for artists of all genres and walks of life to share stripped down, up-close and personal performances with the world.

The direction of each concert is largely left up to the artist, making each performance refreshingly different than the last. One could easily spend hours, even days, diving down a rabbit hole of Tiny Desk Concerts, but to save you some time, we’ve compiled a list of ten performances that stood out to us for one reason or another. While it’s damn near impossible to objectively rank or rate any Tiny Desk Concert, each one has unique personal touch that makes it pop.

We’re excited to share with you the first volume of our TSIS approved rabbit hole, 10 of the best Tiny Desk Concerts of all time. Check out our list below. Enjoy!

About one month before Mac Miller passed, NPR Music premiered Mac’s Tiny Desk. It was his first time performing songs of the then new album, Swimming, in front of a live audience. Known as an artist who’s complexities and awareness ran deep, the up-close nature of the performance allowed for an unfiltered look into Mac’s thoughtful demeanor as he weaves through the lyrics of “Small Worlds,” “What’s the Use” (featuring Thundercat), and “2009.” We also get great look at Thundercat’s seemingly effortless work through the spicy bass line of “What’s the Use.”

In 2018, Tom Misch took to the Tiny Desk to perform three songs from his breakout album, Geography. The jazzy roots of Misch’s music lends itself well to raw nature of the Tiny Desk series, allowing the UK artist to add some extra improvisational flair and the opportunity to jam with Saxophonist, Braxton Cook.

The variety of artists on Tiny Desk is unparalleled. While Sting and Shaggy may seem like an unlikely pair, their performance is oh so right. The two international superstars show off their chops as veteran performers with a vibin rendition of Cris Cab’s “Englishman [and Jamaican] In New York,” a bare bones version of their collab, “Don’t Make Me Wait,” and mashed up Sting’s “Shape Of My Heart” and Juice Wrld’s “Lucid Dreams.”

For those that don’t know, this is the most viewed Tiny Desk Concert and had a hugely positive impact on the careers of Anderson .Paak & The Free Nationals. AP and the boys are just oozing with charisma and confidence from start to stop, and it shows clear as day in the music. You can’t help but smile at the cool, suave energy emanating through the screen. Just another example of how the up-close nature of the concerts and camera work gives an unmatched look at the performance character of these artists.

This particular TDC encapsulates what I love about the series. Back in 2014, T-Pain, known to many as the Godfather of auto-tune, delivered an entirely unedited performance of “Buy U A Drank (Shawty Snappin’)”, “Up Down (Do This All Day)” and “Drankin’ Patna.” Many people are unaware that T-Pain actually has a phenomenal voice, only utilizing auto-tune to distinguish himself from other artists. This performance gave us a rare look at the raw unfiltered talent of the iconic artist.

When Covid-19 hit, NPR Music did the responsible thing and put a pause on bringing artists from all over the world to perform in their Tiny Desk studio. However, instead of pausing the Tiny Desk series as a whole, they adapted to the times and shifted to Tiny Desk (Home) Concerts. Artists contributed the same stripped down performances from the safety of their home set ups, which lent itself perfectly to the talents of Jacob Collier. The polymath musician and famed loop artist took to his home studio, and with the help of a little camera magic, performed “All I Need,” “Time Alone With You,” and premiered “He Won’t Hold You” all as his own four man band.

Someone as famously unfiltered as Tyler, The Creator would undoubtedly deliver a great Tiny Desk Concert. In true Tyler (and Tiny Desk) fashion, the LA artist made the performance his own, hosting the first ever night time Tiny Desk Concert so he could use colored lights to set the mood of each song. While the audience was obviously treated to some of Tyler’s light hearted antics, the stripped down nature of the concert allows for a clearer understanding of his songs’ lyrics, offering a more candid look at his own battles with anxiety and unpacking oneself. This particular performance changed me from a fan of Tyler, The Creator’s music, to a big fan of Tyler, The Creator as an artist.

While Tiny Desk Concerts typically take place in the Washington D.C. office of NPR, this particular performance took place in a very notable location, the White House library. This performance was part of a White House hosted technology and art festival called, South by South Lawn, that took place in the final months of President Obama’s presidency. As an artist, Common has set himself apart by tackling deep rooted complexities and abstract dilemmas, from social justice and familial ties, to hip hop culture and the prison industrial complex. Performing with an all-star cast of friends including the great Robert Glasper on keys, Derrick Hodge on bass, and Bilal on supporting vocals, you can see the disarming, thoughtful energy and peaceful gratitude gleaming from Common as he performs three new (at the time) songs in and one classic.

Surprisingly enough, music’s hottest hip-hop/brass band, The Roots, can all fit behind the Tiny Desk, Tuba and all. While most acts that come through the Tiny Desk perform 3-4 songs, The Roots made their mark with just one. After a ceremonious march into the studio with an accompanying jam, the group was joined by group lyricist, Black Thought, and feature vocalist, Bilal, for the performance of “It Ain’t Fair,” the signature track from Detroit, a film about the race riots in 1967. The 8-minute tune picks apart the construct of racism and examines how it is still tangled in the fabric our country, all while musically ebbing and flowing, twisting and turning like acts in a play.

Blue Man Group have distinguished themselves across the globe as master performers, turning music into the most intriguing display of science and engineering anyone has ever seen. Seeing them condense their typically massive operation into the confines of the Tiny Desk is an absolute treat to watch.

No group encapsulates “cool, calm and collected” as much as the Houston trio, Khruangbin, do during their live performances. The outfit brought that exact same energy to their Tiny Desk Concert back in 2018. With each member nailing their role, all you can really do is sit back and be amazed by their synergy.

According to NPR, this particular episode of Tiny Desk was a year in the making, due to the fact that Madlib, a legendary producer, “insisted on playing with El Michels Affair, a vintage funk and soul band based out of New York.” It’s apparent why. The band had a huge role in this performance, and has us drooling to see more of Freddie Gibbs with a live band. It’s just too groovy.

Tash Sultana is one of those artists who will always be leaving you with your jaw on the floor. For her episode of Tiny Desk, she performs nearly a half hour set, playing guitar as her main instrument, with a synth, some samplers and countless pedals for effects and looping. She also uses two microphones for different effects. Since then, she’s blossomed into one of the most beloved solo artists.

Wu-Tang rolled up to the Tiny Desk early one winter morning with the whole squad ready to throw down. And that’s just what they did, as the crew went through a medley of classic Wu tracks that any hip-hop fan would recognize. The first track they performed was “Triumph,” which led into an old school cipher as Raekwon, Inspectah Deck and Cappadonna traded verses with Masta Killa and U-God. Young Dirty Bastard (the late-ODB’s son), was there as well, providing energy very reminiscent to his father.

Leon Bridges came through Tiny Desk during the beginning of his meteoric rise, and brought so much heart and soul with him. As NPR eloquently put it: “There’s purity in his voice that’s unadorned, untouched and unaffected by 21st-century pop. It’s just soul.”