2013 proved to be a huge year in hip-hop with many artists stepping up and creating well established names for themselves throughout the year. We spent countless hours narrowing down the fine class of individuals by weighing out various aspects from label signings, music releases, live shows, media appearances and ability to create their own unique fanbase. Here is ThisSongIsSick.com Top 10 Breakout Rappers of 2013.

Breakout rapper of the year goes to Chicago’s newest star Chance the Rapper hands down. Having started his 2013 takeover by dropping the highly acclaimed Acid Rap mixtape which featured Childish Gambino, Ab-Soul among others which racked up hundreds of thousands of downloads upon its release. The momentum escalated by a string of collaborations and features including: popular UK singer James Blake on “Life Round Here”, pop star Justin Bieber “Confident”, as well as featured on Lil Wayne’s Dedication 5 Mixtape “You Song”. The hype was solidified with live performances across the US and Europe including a massive overpacked performance in his home city of Chicago at Lollapalooza. He then ventured out on a Sold Out headlining ‘Social Experiment Tour’ across the US. He even managed to slip his way in a televised Myspace commercial. We can expect huge things from Chance in 2014 as we have his debut album to anxiously look forward to. Twitter | Facebook

Breakout D.C. rapper Logic has been hot on our radar for years now starting the year off with a TSIS sponsored Young Sinatra: Welcome to Forever mixtape and then announcing the signing with the iconic Def Jam Records. He has let the news out that he has Hit-Boy and No-Id amongst producers to provide production for his upcoming debut album which is sure to make quite the statement.  He has had multiple sold out headlining tours building his strong group of fans called the “Rattpack” which  really shows that his buzz expands far past the internet. We expect even bigger things to follow with his debut album release next year, watch out. Twitter | Facebook

The extremely young New Yorker Joey Bada$$ (just recently turning 18) has been on a mission to bring back the true “real hip-hop” of New York from the 90’s with his Pro Era crew and has been succeeding well. Joey kicked 2013 off with his collaboration alongside living icon DJ Premiere “Unorthodox” that was unarguably one of the best hip-hop tracks of the year. This was only the first track off his soon to be released Summer Knights EP which turned into one of the best mixtapes of the year. Due to the success of the mixtape select tracks, new ones were released under the same name as Summer Knights EP giving his fans a further taste to hold on to before his debut major label album. Him and his Pro Era crew are apart of a thriving pack of fresh hip-hop collectives in new york with The Underachievers and Flatbush Zombies who all managed to go out on a small nationwide run known as The Beast Coast Tour. Achieving all this and being barely 18 years old shows some insane potential for him to come in 2014 where he has already revealed his debut album is set for an early 2014 release titled B4.Da.$$. Twitter | Facebook

One of hip-hop’s most interesting new faces is the unforgettable voice and charisma of Detroit rapper Danny Brown who broke numerous headlines in 2013. He managed to release his third album “Old” through A-Trak’s primarily electronic music driven Fools Gold Record Label, finding success as the album made its way to #16 on the Billboard 200. The genre defying LP is packed with collaborations from the likes of A$AP Rocky, Purity Ring, Schoolboy Q, Ab-Soul, Freddie Gibbs, Charlie XCX, A-Trak and Rustie. Danny Brown showed real steel by proving he’s not afraid to step out of any boundaries of music and releasing an official remix of indie band Portual. the Man. Continous new music and a track record for energetic onstage presence landed him on stages such as Coachella, Electric Forest, North Coast Music Festival and saw him pair up with trap and bass producer / DJ Baauer on a collaborative sold out “Worst Of Both Worlds” tour. With all this hype, Danny captured a national TV appearance alongside Russell Brand on Kathy Griffin’s Bravo TV Show among many others. Danny has continued to develop off the beaten trail into a new brand of rapping that makes Danny such a hot commodity. We can expect only the largest of things from Danny Brown in 2014 and should expect to see him touring heavily as well as new music. Twitter | Facebook

One of Queens, New York’s finest Action Bronson has put in work for years and finally received his rightful amount of shine by taking his career to new levels in 2013. He kicked the year off right by being featured on A$AP Rocky’s monster Long.Live.A$AP album with a verse on the infamous track “1Train” alongside Kendrick Lamar, Joey Bada$$, Yelawolf, Danny Brown and Big K.R.I.T. Bronson finally received his title in XXL Magazine’s “2013 Freshman Class” which earned him further recognition globally, followed by a much talked about performance at Coachella Music Festival and a co-headlining tour with Bruiser Brigade’s Danny Brown on the 2 High 2 Die tour. The year really heated up after releasing his major label EP “SAAAB Stories” entirely produced by Harry Fraud and features verses by Raekwon and Wiz Khalifa. To keep the buzz brewing, he capped the year off with a very strong and distinctively off-beat themed mixtape “Blue Chips Pt. 2” produced fully by the talented Party Supplies boasting features from Mac Miller and Ab-Soul among others. 2014 for Action features a much anticipated debut major label album with features from legends Nas, Mobb Deep and Kool G Rap already confirmed. Twitter | Facebook

After signing with Rick Rock's Maybach Music Group in 2012, Chicago native Rockie Fresh went under wraps for his biggest year yet. He kicked 2013 off hard with his first MMG release in the form of his much anticipated Electric Highway mixtape featuring Rick Ross, Curren$y, Nipsey Hussle and production from Lunice of TNGHT. Rockie supported the mixtape with a headlining Electric Highway tour bringing out Lunice among others. He was featured on the MMG Self Made Vol. 3 compilation on 6 different tracks. He managed to finish out the year with a free collaboration EP alongside Casey Veggies aptly titled “Fresh Veggies” produced by Lunice, Jahlil Beats and Hit-Boy. 2014 holds a brand new mixtape, which is set to be his final tape with already confirmed collaborations with indie singer Ed Sheeran and production from Lunice, Boi1da and others. This will provide the last push into his debut studio album from Maybach which is set to release in addition to the mixtape before the end of the year. Twitter | Facebook

Following Kendrick Lamar’s footsteps as the next member of the Black Hippy rap group to break out as a solo artist is Schoolboy Q who had quite a successful 2013. An unbelievable amount of hype surrounding his debut major label album Oxymoron that led to everybody not even getting the album with us now having to wait till next February. The album’s first single “Collared Greens” ft. TDE leader Kendrick Lamar was obsessively replayable, which became extremely successful both online and even gaining him radio play. Outside of his solo work he even managed to have an  TV appearance on Jay Leno performing his song with Macklemore & Ryan Lewis “White Walls”. From all of his buzz he earned the right to play all throughout the country supporting A$AP Rocky on his 40 date Long Live A$AP Tour. I have quite a feeling that Schoolboy’s new album Oxymoron is going to be in the same league as TDE mate Kendrick Lamar’ Good Kid, M.A.A.D City with already confirmed features from the entire Black Hippy cast including Kendrick, A$AP Rocky, Danny Brown, Action Bronson, Pharrell and The Alchemist with many more to be added. Twitter | Facebook

Whether it’s his over the top physical appearance (from hair to clothing), unmistakable lyricism on tracks, unforgettable charisma on his TV appearances, sheer ability to captivate his social media audience, or maybe all of these things combined, it’s safe to say Riff Raff aka Jody Highroller has cemented himself as one of the most recognizable and talked about rappers around. Riff Raff was on his grind throughout 2013, producing an overwhelming amount of music video content which consistently showed off his playboy lifestyle while delivering abstract verses. His highly anticipated debut album Neon Icon being released on Mad Decent with feature collaborations with Drake, A$AP Rocky, Future, Snoop Dogg, and other notable hip-hop artists along with Riff Raff stating that he’s creating music video’s for each track on the album. Playing countless dates on Diplo’s Mad Decent Block Party, on top of selling out his own headline shows nationwide is only a taste of the success Riff Raff saw in 2013. The addition of Jody Husky to Riff Raff’s persona has increased his social media presence greatly as the chillest pup in the business keeps his master company along every step of the way. Becoming a regular host on MTV’s red carpet events and guest spots on various shows is only foreshadowing the crossover of Riff raff to the TV / Movie world. He ends the year keeping the world on it’s toes for his debut album Neon Icon set for a 2014 release.    Twitter | Facebook 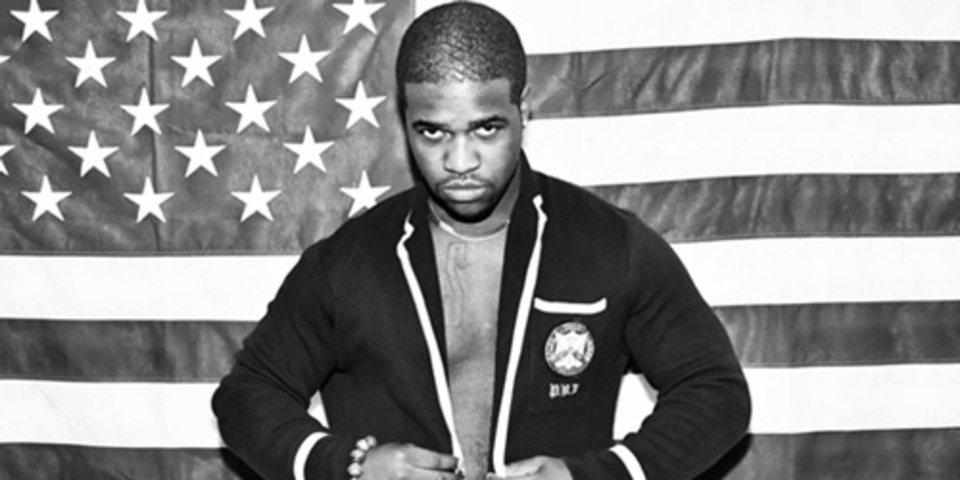 Following A$AP Rocky as the next break apart as a solo artist from the A$AP mob is A$AP Ferg, aka Mr. Trap Lord. He gained attention heading into 2013 with the success of his is song “Work” from the A$AP Mob mixtape, so it was fitting he brought ASAP Rocky, Schoolboy Q, and Trinidad James on for the official remix and what became the first single off his debut project Trap Lord. What started as a mixtape grew into the rappers debut album release due to how big of a project it had become and how many artists were involved. He brought out legends like Bone Thugs-N-Harmony, B-Real of Cypress Hill, Onyx and new stars including A$AP Rocky, Waka Flocka Flame, French Montana and Trinidad James. The song “Shabba” became the artists first radio single gaining huge airplay in the United States. The album overall lived up to the hype coming in at #9 overall on the Billboard album chart. Ferg acted on the hype by supporting Juicy J on his sold out Stay Trippy tour. BET actually named him "Rookie Of the Year", although he was not there to accept the award as he did not think he was going to win, perfectly summing up how unexpectedly big Ferg managed to grow in one years span. His 2014 looks very promising with an expected headline tour, and new music in the works! Twitter | Facebook

While the group Odd Future was spreading virally thanks to members Tyler, The Creator and Frank Ocean, 19 year old member Earl Sweatshirt was locked away at a Juvenile facility in Samoa, although still managed to accumulate a notorious internet fame. 2013 was finally this young rappers time to truly shine as a solo artist with a much anticipated debut album “Doris” which he premiered material for while on stage with Flying Lotus and Mac Miller in the spring. He then released the expectedely offbeat visual for “WHOA” featuring Tyler, The Creator which grew to being his biggest video to date. The album also featured Frank Ocean and Mac Miller, RZA, Casey Veggies among others and was received commercially extremely well hitting the #5 spot on the Billboard Top 200 Overall and even securing the #1 Hip-Hop spot. He put the hype on the line bringing out fans across the US with his co-headlining tour with Tyler, The Creator with all sold out dates. With how promosing his album was and his ability to perform live, Tyler might have a running for top artist out of the OF crew. Twitter | Facebook