The Top 21 Acts You Can’t Miss At TomorrowWorld 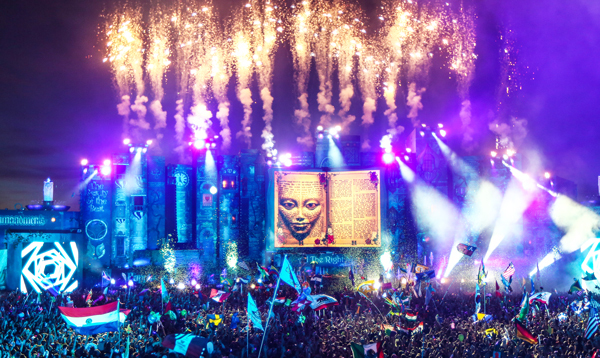 TomorrowWorld is the American expansion of the most buzzed festival of the year, TomorrowLand, and we couldn’t be any more excited for it to kick off in less than a week. On top of the Disney World like production and atmosphere, the amazing location in Chattahoochee Hills, GA (right outside of Atlanta) combined with this festival lineup makes TomorrrowWorld one for the books. It’s great how the festival manages to accommodate for the majority of the house world throughout the weekend. Festivalgoers are able to see everything from the progressive main stage end of the spectrum to tech and deep house grooves, as well as some of the finest ambassadors of the bass and trap worlds along with both hardstyle and trance getting some love.

Well with the festival packing in over 150 acts throughout the weekend, we thought throwing together a "Top 10" list of acts you can't miss just wouldn't do it justice. So we've spent a seemingly endless amount of time assembling the essential guide of Top 21 acts you cannot miss while attending TomorrowWorld.

One of the most equally exciting and unique acts in electronic music, Dillon Francis, is set to have one of the biggest sets of the entire weekend. Recently teasing us with some massive new anthems from his upcoming debut studio album set to release next month, we can hopefully expect to hear more new cuts from the much anticipated record. It also helps that he has a pretty consistent track record of completely destroying crowds at every festival he makes an appearance at. Missing this set will be one of the only things you can regret during this eventful weekend.

The man responsible for making "twerk" apart of our modern society on top of endless hit records, headlining too many festivals to count, Diplo is easily one of the hottest acts at TomorrowWorld. As he goes up against all of the other top global house acts he is guaranteed to bring out all the guns and will be a set you really shouldn't go without.

The global icon for bass music, grammy award winning Skrillex, is an act you should always make sure to observe. His debut artist album, Recess, saw massive success this year as the DJ showcased various new styles and expanded his sound to a far wider scale. Having a strong techno and electro influence, thanks in part to his Dog Blood collaborator Boys Noize, has only brought an even more exciting edge to his always changing style. Hopefully he has brought out his visually stunning spaceship, but either way you won’t want to miss out on this set.

French trendsetter Tchami has been turning heads with his unique, high energy style of dance music he is calling “Future House”. If turning out multiple successful singles and remixes wasn’t enough, the man is a beast behind the decks. He seems to always show up dressed as a priest which makes sense considering his sets are quite religious. Catching his set is sure to be a quite the highlight for all that do.

Well if being chosen to replace headliner Avicii on mainstage wasn’t a big enough statement, we must further emphasize that this is without a doubt one of the top acts you need to see at TW this year. The exploding Norwegian producer DJ will be bringing his Tropical House sound for a change of pace from the typical main stage acts. This is going to be a turning point for not only Kygo’s career, but hopefully a jumpstart on including more diverse styles on the main stages at festivals of this magnitude!

The king of bass music has made his mark as one of the top ticket selling acts in the country over the past 10+ years. Bassnectar just released a brand new album Wild! which we can expect to hear live for our first times. He is guaranteed to give you the proper bass assault to your ears that will have you feeling it throughout the whole weekend.

The renegade of funk and soul otherwise known as GRiZ is one of those acts that truly exemplifies the phrase “you need to see it live” as the producer is much more than a DJ, but instead a true live musician. He plays live with a saxaphone and midi controller to truly connect with the audience on a deeper level than traditional producers are able. On top of being a TSIS longtime favorite, he is a guaranteed highlight for all the festival attendees who manage to catch his set!

This Canadian duo has become one of the most powerful figures in the bass world due to their mixture of an endless supply of flawless production and even more impressive live shows. They always manage to string together the perfect blend of genres while maintaining a certain melodic quality to contrast the dark edge they posses. There is a reason these guys have only continued to grow, and you should experience it first hand if at all possible.

The UK to LA transplanted DJ Mat Zo has no fear of any style as he has been successfully turning out productions ranging from Trance and Electro all the way to Drum & Bass and everything in between. His successful debut studio album packed a different style on every single track. This same mentality of utilizing diverse styles is apparent when approaching his live set as he leaves no genre unturned for an experience that wouldn’t be wise to miss out on.

Montreal producer / DJ Snails is one of the most exciting things in bass music today. Receiving support from just about everyone ranging from Skrillex to Diplo and everyone in between, SNAILS is in the midst of his first run of US shows ever, and his set will be one for the books. His Snailed It mixtape was literally completely full of unreleased music, and he has made it clear that is how he crafts his live sets as well. You can expect to hear an endless amount of unreleased music, and to get be thoroughly blown away by this star act.

Jamie Jones, one of the UK's most acclaimed underground house icons, is quite the refreshing glass of styles you must catch this weekend. The founder of the influential Hot Creations label has a library of music most couldn’t even dream of. He will bring his pool party vibes blending deep and tech house to make TomorrowWorld groove in a whole new dimension. He attracts a crowd that is ready to get sweaty and dance like no other, and that’s exactly what will be going down this weekend.

Ain’t no party like a Bro Safari party, because a Bro Safari party gets wild as f**k. But for real, the amount of madness that goes down at every set from this guy is one for the books. He is guaranteed to flawlessly mix through an unheard amount of diverse bass anthem. Get ready for quite the high energy ride!

Founder of the insanely influential bass infused tech house label Dirtybird Records, Claude Von Stroke is a DJ that knows how to work a crowd. He is sure to impress with a nonstop flow of tech and deep house gems produced by both himself and his fellow label mates. You will find yourself unable to resist the urge to groove and get down to his set that is sure to be one to remember.

A TSIS favorite we have been supporting since his bootleg mashup days, 3LAU, has become one of the hottest and most exciting figures in the Progressive and Electro house worlds to watch grow. On top of playing out too many clubs and festivals to count, 3LAU has done collaborations with both Tiesto and Dash Berlin. Thanks to his early days of being a mashup expert, his live sets are very exclusive and full of a nonstop flurry of custom unreleased bootlegs that will keep you on your toes. This set will surely be something you shouldn’t miss out on!

The next house star to explode out of the Netherlands is Oliver Heldens, the man pushing the new “Future House” genre alongside artists like Tchami. Stemming from the deep side of house music, Oliver Heldens has certainly made his mark this year including multiple #1 Beatport hits like “Gecko / Overdrive” and “Koala” among many more. This Dutch producer has broken into the international festival circuit; making it hard to not be aware of the young producer / DJ as he is guaranteed to have a must-see set over the weekend. Enjoy!

Brillz signature “twonk” montra will be on display in full force as the trap and bass heavyweight will have breaking all types of rules during his set. His endless amount of massive remixes and originals on top of his Twonk clothing brand has organically formed a very loyal fanbase that will be in full force at this set!

Fools Gold records founder, legendary turntablist, and one half of supergroup Duck Sauce will be sure to amaze this weekend. The producer and DJ is one of the top skilled producers in the world who always amazes with his traditional live mixing skills that unfortunately the majority of DJs don’t have. You’ll be sure to hear tons of Fool’s Gold gems including hits from Duck Sauce and his new collective, Low Pro’s.

The man literally responsible for the “Festival Trap” genre will be in his natural habitat this weekend and ready to shut down the largest of crowds as he makes a main stage appearance. With his latest single “Bricks” helping the artist see an ever greater level of success, the masses will gather to see a set for the books. With a track record of bringing out special guests like Tiesto and Waka Flocka, we can only expect some surprises for his guaranteed high energy live set.

The Canada to LA duo DVBBS first exploded onto the scene with their hit Tsunami, which became the unofficial anthem of the Belgian TomorrowLand festival last year as almost every DJ played the hit tune. They have become familiar faces with the festival family and are set to have a very large set. The energy this duo possesses live outshines the majority of the DJs on this lineup by a long shot, so make sure to check it out!

For LA based duo Slander “exploding” is quite the understatement as they have climbed endless ranks over the past 6 months. This is thanks to a solid stream of what they are calling “Heaven Trap” remixes that have been causing the start of a movement. They got offered a last minute slot to fill in for Nicky Romero at Nocturnal Wonderland on mainstage, and they absolutely crushed it as they proved how capable they are of shutting down festival stages. While their set is early, it is sure to be very impressive and another not to miss!

Another one of the very few acts at the festival with any true live component, Toronto based trio Keys N Krates are guaranteed to bring a live element you will be craving in the sea of DJs. With live drums and keyboards on top of DJing, they bring a unique hybrid full of trap, hip-hop, and other styles for an experience that is very live.