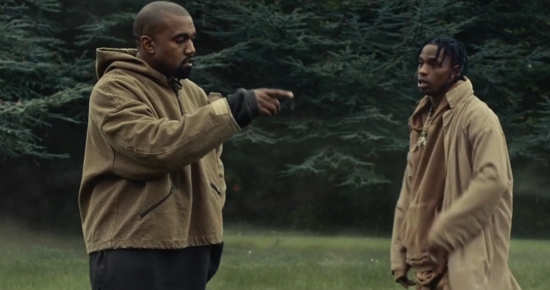 Travi$ Scott and Kanye West have just released their official music video for the “Piss On Your Grave” through Apple Music. Co-produced by Kanye himself, the track was a standout from Travi$’ album Rodeo.

Now offering the visuals for the menacing song, Kanye and Travi$ trudge around a foggy wood both dressed head to toe in Kanye’s new fashion line. Making some interesting facial expressions to say the least, Kanye is back to his fearless ways. Complete with scenes of presumed piss flowing over skulls in the dirt, director Nabil doesn’t shy away from explicitly depicting the two artist's foreboding lyrics.

And for all you Kanye fans, Travi$ Scott recently confessed while on Zane Lowe’s Beats 1 Radio that Kanye’s new album is “coming very soon, as you can see relayed in this tweet below:

Until then, enjoy the video treatment for "Piss On Your Grave!"