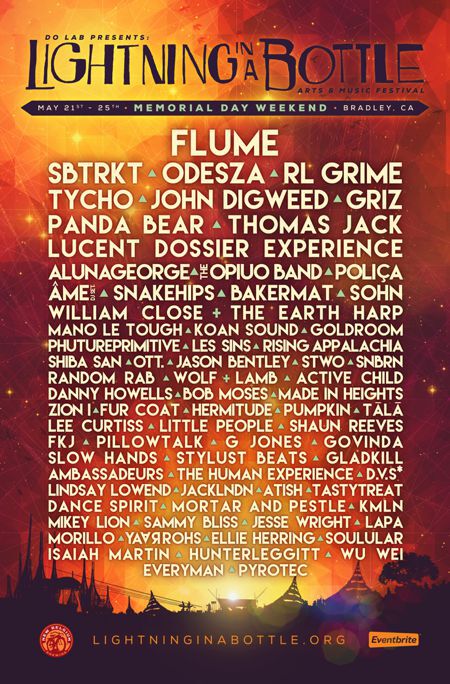 One of the most unique and exciting festival experiences each year is Southern California’s own Lightning In A Bottle. The festival is set to return for it’s 2015 edition in a new location:  San Antonio Recreation Area in Bradley, CA.

The festival organizerd have managed to not hold back in the least on this year’s cast of artists, providing one of the most impressive lineups to date. Featuring headliners Flume, SBTRKT, ODESZA, RL Grime, GRiZ, Tycho, John Digweed, Panda Bear and Thomas Jack which set the tone for the diverse festival. Other notable acts include AlunaGeorge, Opiuo, Snakehips, Bakermat, KOAN Sound, Goldroom, Shiba San, Stwo, Wolf + Lamb, Les Sins, SNBRN, Hermitude, Lindsay Lowend and Jack Lndn among a huge list of others. Look at the full stacked lineup of even more names.

Tickets for this year have been going fast, so pick up yours before they sell out!

You can purchase general admission and boutique camping tickets here.

Lightning in a Bottle – 2014 Official Video