The always-eccentric ZHU has done a little bit of everything this year – in 2017 alone the artist dropped an EP, shared remixes for tracks “Feel It Still,” “Andromeda,” and “Bad & Boujee,” linked with Adidas for a cinematic joint campaign, launched new storyline The Blacklizt with a New York warehouse show… the list goes on. Today the unconventional producer is back with yet another new song and an exciting event announcement leading up to his New Year’s Eve Blacklizt Show.

Although anyone can hear the new track titled “JET THE DOBERMAN,” this morning, ZHU surprised followers that signed up for The Blacklizt phone list by sending them a text linking to a previously unreleased song and a pop-up shop announcement leading up to his NYE show in San Francisco.  See text screenshot below. The song is still only available as a private stream to fans who signed up for his texting list, so be sureto do so if you haven't yet.

ZHU combines a handful of genres with this single such as house, hip-hop and trap. He leads you in with some movie-like production, dog barks and a (surprisingly) country-esque vocal sample. Some bright synth melodies that only grow more frantic as the song progresses come in from there, along with brassy basslines and a hip-hop inspired kick. A chill guitar breakdown jumps in mid-track, leading into some vocals and heavier production to close it out.

As for the pop-up shop, that will take place from Dec. 30 to Dec. 31 at Black Scale, located at 1409 Haight St. in San Francisco. It will feature new merch from ZHU that’s never been revealed to the public. The dresscode for the producer’s New Year’s Eve gathering is all black everything, so act accordingly (pre-sales are sold out, but you can show up early to get in – more info here). In the meantime, check out his new single below and enjoy! 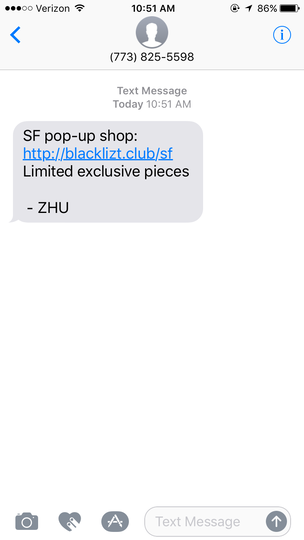