With only a couple days away from Coachella’s 2018 festivities, the Southern California festival has officially announced their set times for Weekend One. Coachella is known for curating some of the most stacked lineups of the American festival circuit, so of course, there’s a slew of scheduling conflicts that festival goers will have to consider before they walk through the gates on Friday.

Most of the highly coveted electronic performances will be taking place in Sahara tent, but if you’re also planning to check out some of the great hip-hop artists as well, you’re going to have some decisions to make. Friday will be featuring tons of killer closing acts. REZZ will be closing out the Sahara tent at the same time as Jamiroquai closes out the Mojave stage, all the while The Weeknd performs on the main stage. On Saturday you’ll have to choose between Tyler, The Creator, Louis The Child or Tash Sultana. Early Sunday afternoon you’ll have to pick between two of our favorite artists, San Holo or THEY. Unfortunately the whole weekend is filled with scheduling conflicts but that's just part of having a lineup this stacked.

If you were unable to cop tickets to Coachella this year, then we invite you to kick back on your and couch join us as we watch the official livestreams that will take place exclusively on their YouTube channel. There are 85 artists that have been selected this year for the livestream that include Illenium, Kali Uchis, Migos, Odesza, Vince Staples, Whethan, and plenty more. This year you will actually be able to create your own schedule from the lineup page on Coachella.com. By simply clicking on an artist from the channel schedule, the live stream will automatically switch to that channel.

Obviously there are some big decisions to make this year in regards to scheduling. We recommend getting a head start on this now so you don’t end up missing one of your favorite artists!  See the festival map below as well and enjoy! 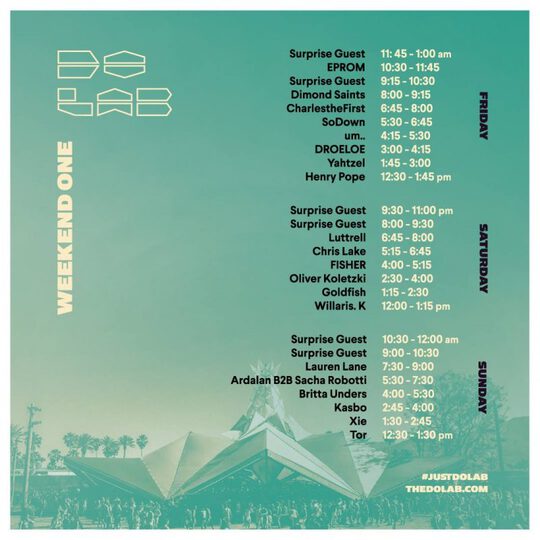