It's no suprise that Electric Forest is one of the TSIS crew's favorite times of the year, from the unique experience, community built around the festival, and the always epic lineup. This year, the festival was the only in America to sell out ahead of the lineup being announced, ahead of even Coachella and EDC in Vegas.

Well the not so typical festival decided to have some fun with the reveal of the 2016 lineup due to it being sold out ahead of time.

They've decided to reach out to one of the most defining factors of Eletric Forest, the community around it. They've sent out the lineup piece by piece to hand pick Electric Forest attendees. The fans are then posting the pictures and videos of the pieces online via the #EF2016Reveal hashtag.

So far it's already been unveiled that Fetty Wap, Adventure Club, Bonobo (DJ Set), STS9 and Flosstradamus have been announced among many more sure to come.

We will be adding to the running list of names below live as they pop up online until the full lineup is out. Enjoy! 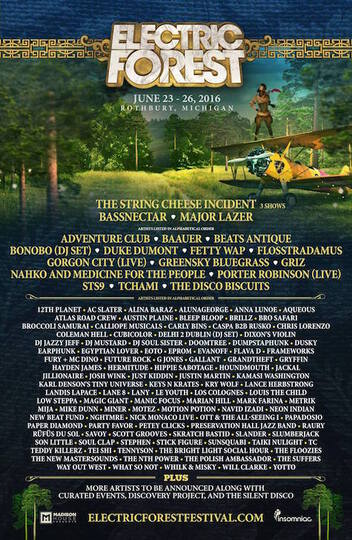