It’s impossible to understate the void that so many of us felt during the COVID pandemic and lockdown. While we may not be entirely out of the woods just yet when it comes to the virus, it’s been absolutely life-giving to be able to attend, work, and experience live music once again. I can say without hesitation that, after a long, 3-year hiatus, Electric Forest has come back stronger and better than ever.

Every facet of preparation comes into play leading up to the weekend from the packing to the commute to the camping. There’s such a build-up of emotions simply due to the fact that we haven’t been able to do this for so long. Upon arrival, the excitement in the air was simply electric. Whether it was the locals accepting us 45,000 transplants into their backyard, the workers and volunteers happy to be working again, or us attendees who’ve been dreaming of this weekend for years, you could sense that everyone needed this to happen.

Picking up right where they left off, Electric Forest hit us with a spectacular lineup that we knew would inevitably have schedule conflicts. We spend so much time planning out our schedules only to make plans we most likely won’t keep. But that’s part of what makes this place so special and that’s why people come back. Only at Electric Forest can you be on your way to see your favorite act before being distracted by the performers in Sherwood Forest, a tree-phone ringing nearby, a comedy show at The Library or a commotion happening at The Honeycomb. The trick is to not worry about who you’re seeing but embrace the experiences that are thrown your way.

Many of my favorite moments were the collaborations and shared-stage opportunities that present themselves so beautifully throughout the weekend. After some unfortunate technical difficulties, CloZee stood in front of thousands only to be cheered and inspired by all of us empathizing with the French bass queen. Once those issues were resolved, she put on a set to be remembered and brought out LSDREAM for their new collaboration that lit up Sherwood Court. 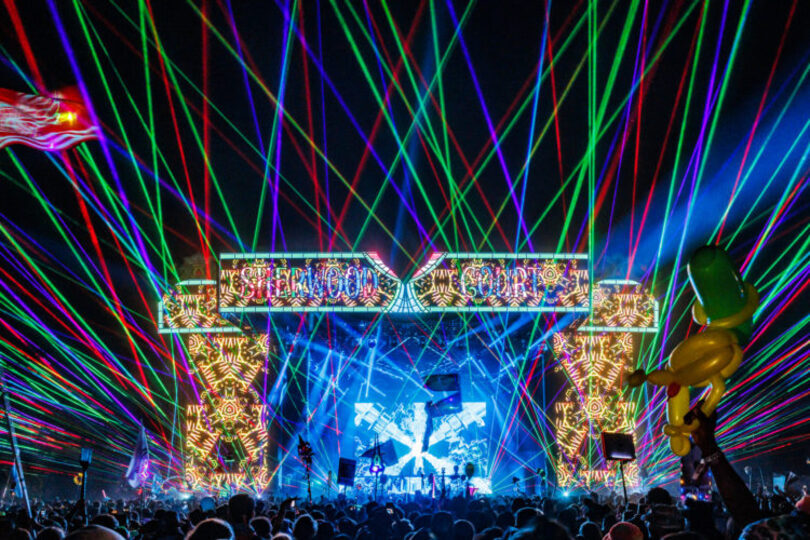 The obvious king of the weekend was GRiZ as he drew some of the biggest crowds at the Ranch Arena for his all-out headlining performance and his vibey Chasing The Golden Hour set. Denver’s saxophone-wielding bass hero was all over the place including multiple sets with Big Gigantic and Louis the Child throughout the course of the weekend. It’s a special moment to see one of the biggest names in electronic music wandering through the Forest like a little kid because that feeling is something we should all be allowed to enjoy.

Without fail, The String Cheese Incident’s Saturday Big Shabang performance was something to behold. The production size these legends are able to churn out is otherworldly and each and every time they somehow manage to one-up themselves. Pyrotechnics, fireworks, spark shooting skydivers, awe-inspiring covers, giant balloons, and the world’s largest disco ball (held up by a literal crane) will be engraved into my memory forever.

Despite the endless amount of sand that managed to sneak its way into your shoes, I would argue that some of my favorite sets happened in The Carousel Club. Whether it was the disco party that was Franc Moody, CloZee‘s surprise “redemption” set, the funky vibes of Lettuce, or the festival closing Lotus performance, there was always something exciting happening here. The latter was responsible for one of the greatest live covers I’ve ever heard, which was an epic, jam version of RÜFÜS DU SOL’s “Innerbloom”.

There’s so much to love about this festival and yet there’s so much more I wish I could’ve done. The beauty of this place is the attention to detail, the love and the energy that people bring with them, the enormous size and the endless capabilities that are presented to you. It’s the ultimate reason why people attend numerous years and it’s the reason why Electric Forest is simply one of the greatest festivals you could attend.

We live in a crazy world where we’ve survived but are still enduring a pandemic and where we live in a country that believes women shouldn’t have the right to choose what to do with their own bodies. It’s hard sometimes to stay positive and inspired but nothing cures the heart quite like music. I wish more people had the chance to experience things like Electric Forest because I truly believe it would make this world a better place. I hope with every ounce of my body that we can all find love and beauty in things like this so that we can inspire others that need guidance.

I’m forever thankful to Electric Forest for the opportunity to attend this year and I already look forward to next year!