Eminem Gets Interviewed By Stephen Colbert On Michigan Public Access Show : Must Watch 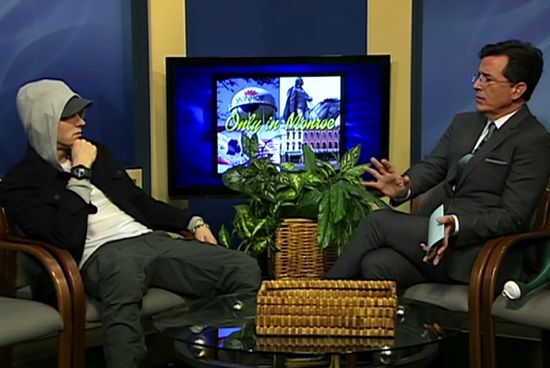 Stephen Colbert recently ended his iconic show The Colbert Report on Comedy Central with the exciting news of taking over The Tonight Show, but temporarily he is in between shows until The Tonight Show is ready for him. Well Stephen Colbert couldn't hold back from hosting a show and took matter into his own hands and visited the small town of Monroe, Michigan and took over their local Public Access show "Only In Monroe" and stepped in as the guest host. To make things even better he brought out a guest for this special edition of the show, and the guest is none other then Eminem.

Now if that doesn't already have you sold, just sit back and watch this simply hilarious, just under 60 minute long talk show. Stephen starts off delivering a funny tale between a local business and a Yelp customer which then brings us to the prize of the show with Eminem. I honestly can't figure out if Eminem is joking around and acting, or if geniuenly gets pissed off at Stephen's purposeful igornanace of Eninem's massive career writing it off as a hobby that he should just give up on.

Grab some pop corn, sit back, and watch one of the funnier interviews we've seen in quite some time. Enjoy!