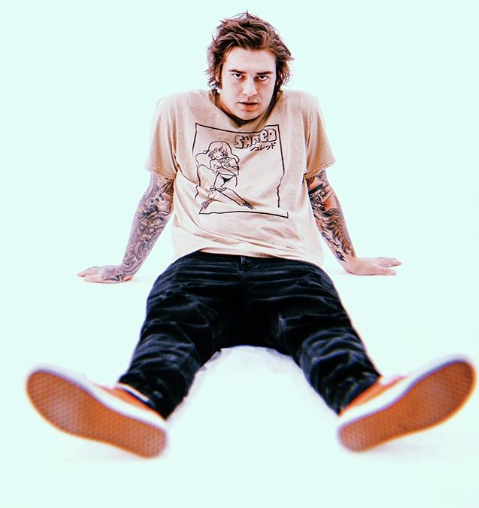 From dubstep to trap to future bass, house, hip-hop/rap and beyond, Getter has continued to thoroughly impress us over the years. With over 14 EP’s and one full-length LP under his belt, at 25-years-old Getter has already accomplished a careers worth of achievement having been in the game for just over 7 years. We actually just broke down his career in this "Evolution of Getter" editorial you should check out.

Having picked up major traction with his hip-hop side project Terror Reid over the last year, the young LA-based artist has been keeping incredibly busy releasing countless singles under his two projects, while at the same time on tour and managing his imprint, Shred Collective. With his forthcoming album Visceral set to drop tomorrow (Sep. 28) we took some time to sit down with Getter to talk about music, life lessons and more. Enjoy!

Congrats on getting Visceral out there! This album seems to be a big step both personally and in your career – what does Visceral mean to you?

Thank you!!! It’s definitely the first project in my career that I feel will define me moving forward. Super super proud of it. To me, Visceral is a coping mechanism, it’s a diary, it’s a million different things in one. But most importantly, Visceral is my chance to be an example. I want to convince everyone to wear their heart on their sleeve. I know what it’s like to struggle with depression and anxiety and most people my age do nowadays. It’s confusing, and it destroys you. This is my way of dealing with it and I want to urge everyone to be open and honest with themselves and their peers. This shit is real and it’s time we recognize it and deal with it head on.

You’ve said in the past that Visceral is a follow-up to your Planet Neutral project – in what ways are the two connected?

In some ways it is connected to planet neutral. It’s a similar vibe – honest, real pieces of music that tell a story. Music that can be listened to without partying. Stuff like that.

How long did take you to complete this album, from start to finish?

Well the first actual song, “Hold On Tight” was made like 2 and a half years ago with Njomza. From there I just was making pretty music. Then it turned into me actually feeling shit and using it to help myself cuz i didn’t know what else to do. I really wanted to take my time and polish it off and get the best features to match the vibe.

How has your personal taste in music changed over the course of the Getter project and has that had an impact on the music you make?

It has changed a lot. Definitely have been listening to a little of everything. At first, when I was lashing out and being an asshole, it was immediately me listening to angry music and saying “fuck EDM” and all that. After assessing my problems and quitting drugs and shit I realized how much music can help me, not just creating it but also listening and feeling it. I mean fuck one day I’ll be listening to The Black Dahlia Murder then switch over to Bright Eyes. Definitely changed my outlook on music completely.

Is there a specific track or moment from the album that is most important to you?

I think “Colorblind” was the game changer for me. It was my first time being like “fuck I AM depressed and I’m sad all the time and I AM sorry to anyone I’ve made feel like shit but I don’t want to tell everyone and start a pity party so I need to write down all the madness in my brain to MAYBE make people try to understand” and I spent  hours yelling and screaming and crying trying to make the perfect part of a different song that people will remember. The album version is my favorite.

What was the most important thing you learned while crafting this album?

I think not being afraid to open up and be honest with people rather than hiding behind a persona or a brand is what I’ve learned. People need something to relate to. They need something to distract them from this fucked up planet. They need to see the good in the world instead of all these fuckin articles popping up. Yes the world is fucked but there is beauty in pain. There are good things too and I don't know… I just wanna see everyone happy in the end. I just want everyone (including myself) be happy.

You’ve been vocal about your disdain of EDM in the past. What is it that ultimately turned you off, and has your mindset on the genre changed since you made those comments?

I went on a huge rant when I was breaking down. Said a lot of dumb shit. When I said I was quitting EDM and shit, I just meant I wanted to pursue a different style. I blamed everything happening to me on everything else. I never truly looked at ME and what I was doing. Clearly didn’t mean all that shit, but i get it now. I don’t hate the genre.

What were some of the hardest challenges you’ve faced in your music career?

The hardest shit for me is the hate. Or when people act like they know you. Or fake people. People think that when someone has followers or gets “famous” that they aren’t human. Like they can say whatever they want. And that’s possible now with social media and everything. But the only thing separating famous people and not famous people is the word “FAMOUS”. I’m just a person like you but I did a few things to make a name for myself. But I still have feelings and I still have opinions. I’m a person just like you. But yeah I don’t know, people get nasty. That and people that act like they give a fuck about you to get something from you. I used to have so many “friends” but I got a small circle right now of people that really actually give a fuck about each other, and it’s nice.

We’re HUGE fans of Terror Reid and all the rap production you’ve been doing. What’s next for Getter and Terror Reid?

Thanks! I’m working on a lot of hip-hop with my homie eliozie, he’s like the best rapper right now. We finished his album, I’ve started on my Terror Reid album and I’m already working on another Getter album. My goal now is to top all my older music. So just expect a lot of great, honest music 🙂