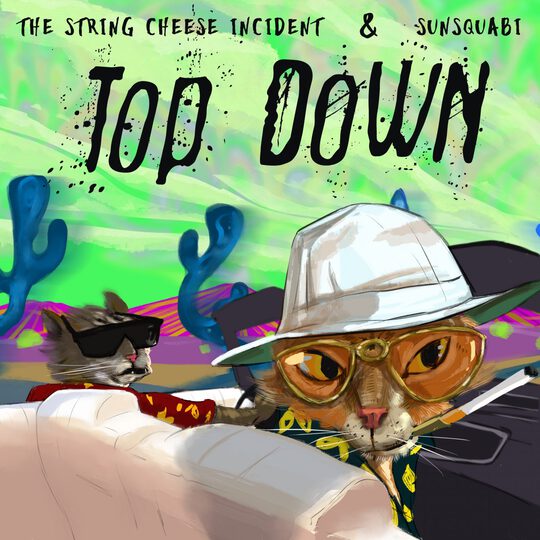 Colorado-bred jam/funk aficionados SunSquabi are always cookin’ up groovy new jams, even from isolation. Paired with Colorado native jam giants The String Cheese Incident, the two groups are a match made in heaven. We’re stoked to be premiering these guys’ freshest creation, a funk-in-your-face track called “Top Down.”

“Top Down” gave SunSquabi the chance to work with a band they grew up listening to and ultimately admire. This irresistible new groove effortlessly fuses Squabi’s native synth and percussion work with the signature organ arrangements and freestyle tendencies of String Cheese to create a jam for the ages. It’s impossible to sit still from the very onset of “Top Down,” effectively making it one of the funkiest heaters either group has released to date!

Both groups say they had an absolute blast collaborating on this track together. Coming together over the course of a year, “Top Down” proudly features assets each band has to offer. As both String Cheese and SunSquabi have incredibly noteworthy percussion, the single actually highlights both groups’ drummers, Jason Hann (SCI) and Chris Anderson (SunSquabi). SunSquabi frontman Kevin Donohue described working with String Cheese as a “dream come true.” Kyle Hollingsworth, the lead for SCI on this track, mentioned how working with Kevin and SunSquabi was seemingly effortless:

“This was a blast, working with Kevin was so easy and organic. He set up a great groove and I just played similar ideas and he compiled an awesome track! So much fun, let’s do it again!

Check out the exclusive premiere of “Top Down” below and get groovin’!