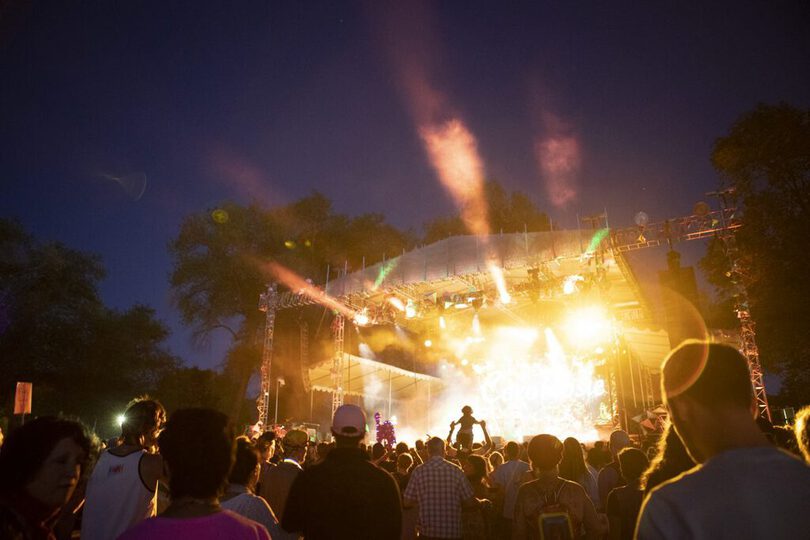 When I first ascended into Taos, New Mexico after the gorgeous drive through the Rocky Mountains from Denver, I could sense a certain allure about this place that would resonate with me in the following days. Most festivals that are set up in the middle of a city take place in locations like Los Angeles, Chicago, or other large metro areas. Meow Wolf, however, being the unique entity that they are, decided to nestle their festival, Taos Vortex, right in the center of Taos in Kit Carson Park.

I’ve been to Meow Wolf’s must see House Of Eternal Return exhibit multiple times, and immediately Taos’s charm struck me in a similar way that Santa Fe did. Right off the bat it was easy to understand why they wanted to have the Vortex in Taos. It’s a smaller and more rural location than the capitol, a city known for its older, fine art community. We know from our interview we did with Meow Wolf directors Max BK and Sofie Cruse, that Meow Wolf wants to focus on the fun aspect of art, and Taos seemed to be very welcoming of that vision.

With Taos being such a comparatively small city for a festival, I couldn’t wait to see what Meow Wolf did to take over Kit Carson Park, the heart of the town. Upon arriving to the site, I was surprised how small in fact the whole venue itself was. Others might be taken aback by this, but for me it meant one thing, this was going to be one of the most intimate musical experiences that I’ve ever had.

The thought of seeing huge, globally renowned musicians such as Claude VonStroke, Flying Lotus, and ZHU in a park that is probably most often used for family picnics and small get-togethers was getting me excited.

Once Justin Jay came on the main stage (which was where most of the live acts played), I knew Taos Vortex was going to be able to hang onto a beautifully intimate and communal vibe throughout the whole weekend. There was enough space for the attendees to dance wherever they wanted without having their personal space intruded upon. This was even true for when Justin Martin and Claude VonStroke threw down on the side stage, which still had perfectly tuned sound.

I spent the first day locked into a house music groove with the aforementioned Dirtybird mainstays, so I decided to roam a bit more freely for the remainder of the festival. I came across some amazing art installations, like this giant, glowing praying mantis on wheels that was operated by multiple people, waving its arms in the air and nodding its head back and forth. There were various different performance troops that dressed up in wild costumes and performed dances and interacted with the attendees, including myself. The Fungineers even pulled up with their own little ice cream truck stage to spice things up even more.

After a day of checking out all the weirdness, it concluded perfectly with a mesmerizing 3D performance by Flying Lotus on the main stage (which at this point made me think of the Taos residents and what they thought of this extremely bizarre party taking place in their city).

By day three, the weirdness had settled in for everyone. I noticed a lot more people interacting with the art and performers, and goofing around on the dance floor in general. The Desert Hearts Crew had an amazing daytime vibe on lockdown on the side stage, taking control of the afternoon for six hours straight with their beloved, fun-loving energy. The last hoorah of the festival was G Jones, who, while ZHU was in command of the main stage, threw down an absolutely wild set to squeeze the last bit of energy out of everyone.

Some of my favorite music festivals are the ones that make you forget that you’re even at such an event, and I definitely got lost in the Vortex. Not in an intense, psychedelic way, but more of a childlike, whimsical way. The intimacy and the friendliness of the staff and attendees is something that stuck out to me more than most of the boutique festivals I’ve attended. I think this was fostered by the welcoming vibe of Taos itself, and the Meow Wolf organizers who picked the location. There are memories that were made there that won’t soon be forgotten, and I can’t wait to see what Meow Wolf does next. Enjoy!