The ever-evolving artist is best known for his works as a DJ for Eminem and Nas. He also produced mixtapes for Eminem's Shady Records. TheSpvceAge brings a fresh, hybrid sound combining classic G-Funk hip-hop reminiscent of 90’s Dre productions with space-driven, electro funk. "You" is highlighted by a futuristic, funky bassline that's mixed with distorted vocals and spacey melodies.

Tdot Illdude's airy vocals round out the track, making for an impressive debut from TheSpvceAge. We had the pleasure of speaking with Green Lantern about his musical journey and of how TheSpvceAge came to be. See below and enjoy!

What inspired you to create a new project under the name TheSpvceAge?

I've been experimenting with electronic music for a few years now and I feel like i've developed a new sound with this project and wanted to give it it's own name..TheSpvceAge being it's own thing is great for me because I produce very different styles of music and want to give this new sound some room to breathe and have a life of it's own, almost like a new tree…water it, let it grow and get a specific fruit from it..As opposed to adding this sound to the DJ Green Lantern world, where it may get lost in all the HipHop, and rap music folks think of when they hear that name.

How would you describe the sound of TheSpvceAge?

It's kinda hard to describe the sound of TheSpvceAge but I like to say "If Roger Troutman, Eric Sermon and Earth Wind & Fire got in a studio and made electronic music, this is what it would sound like…lol…" More descriptively tho, it's melodic electro funk with a retro-futuristic feel and aesthetic . Trippy !

As someone who’s been in the hip-hop scene for many years, what does it mean to you to take a new direction with your music?

For me, it's always fresh and exciting taking a different direction with music..Im always going to be HipHop till I die, but I'm also a general music lover at heart, which then translates to different sounds and melodies that I would want to live on their own, not necessarily in a HipHop context …

What about electronic music first caught your interest?

Just really the freedom a producer has to make his own mark, away from being tied to a vocalist, rapper, etc…The freedom to use different sounds, and arrangements..Not being bound to a particular song structure. Those were really the first aspects of electronic music that caught my interest…

How did you link up with Gramatik?

I wish there was a really cool story about a chance meeting in catering at a festival lol, but the reality is I made this song "You", and sent it to him via twitter..He said it was "beautiful" and I added I would like to release it through his label Low Temp records..he said "hell yeah"!, and here we are.

Just having fun, releasing a gang of music with this sound… an EP of originals, some remixes of songs that are out, and a 30-40 min mix sometime around the top of the year..and getting this live experience together for TheSpvceAge shows–thats gonna be a good time! 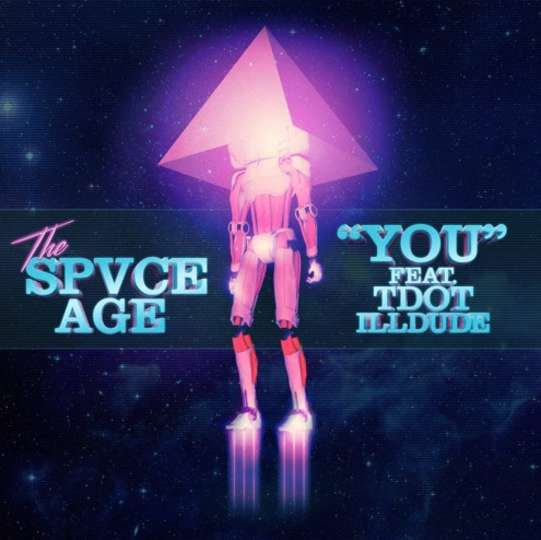