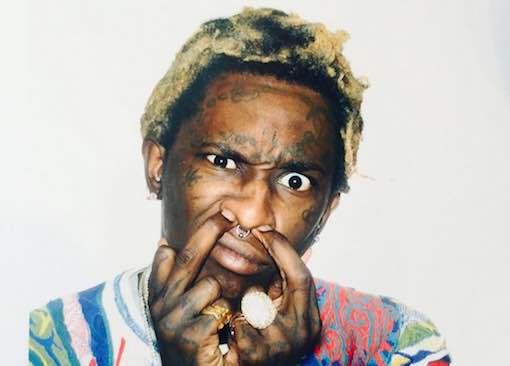 There's something about Young Thug that's bizarrely intriguing. From his cross dressing to his incredibly catchy and mostly indistinguishable lyrcis, this Lil Wayne inspired rapper's ad-libs are as hilarious as his fashion style.

From first being put on the map by Birdman and Lil Wayne, to being a part of the Rich Gang crew with Rich Homie Quan & Birdman, Thugger has had some huge success establishing his name. One of Young Thug’s most recognizable recent tracks to date was his feature on Jaime XX’s “I Know There’s Gonna Be (Good Times),” which has gone on to become a cross-genre summer anthem.

There is no word about the pushed back release date for his debut album with the unpronounceable name Hy!£UN35 (formerly set for August 28th), but today we get his latest mixtape Slime Season in full, to both stream and  download for free.

Regardless of his public feud with Lil Wayne, we interestingly hear him featured on the tapes' lead single "Take Kare." This 18-track mixtape also has features from Quavo & Offset (of Migos), Young Ralph, and Peewee Longway. Grab the free download here and enjoy!